Veterinary Students from the University of Georgia – We Arrived! 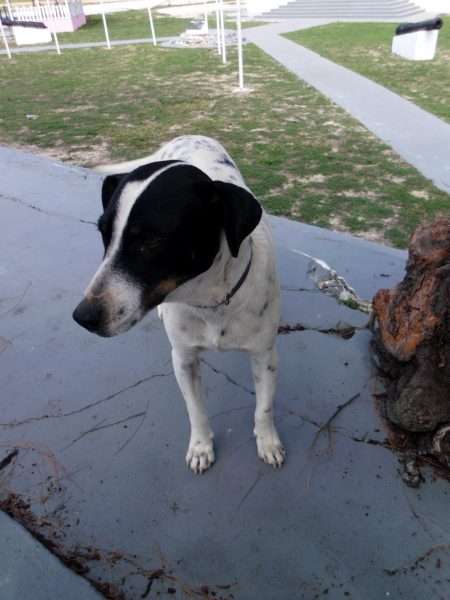 We’ve arrived! After a bit of a weather delay on the runway in Atlanta, and a dash through the Charlotte Airport that made the Olympics committees take notice, we flew into Rock Sound International Airport this afternoon. Robyn, one of Shaun’s people, picked us up from the airport and took us back to Tarpum Bay, where we’re staying. She’ll be helping us out with our projects during our stay. Shaun has been gracious enough to allow us to stay at his old home in the center of Tarpum Bay, a stone’s throw from the shore, complete with the white sand and blue water that travel magazines love to splash on their covers. Yeah, we’re roughing it for sure.

We got in just in time to put our things away, then join Shaun at the Mission House for dinner. There, we met a group of students from Hendricks College in Alabama, who are here doing mission work with Island Journeys.  A lot of these groups come through and participate in projects all over the island, such as building community centers and public buildings for the betterment of Eleuthera, and they get to help others, learn all about Bahamian culture, and soak up the sun – pretty cool, if you ask me. The group had just gotten into town as well, and they were very enthusiastic about the work that they would be doing.

After dinner, we walked around and explored Tarpum Bay, to see what we were getting ourselves into. The settlement is small in our eyes, but it oozes that feeling of homey community that makes me envious over most places back in the States. Everyone that we passed was friendly and offered us an “hello” or a “good night.” There are a large number of potcakes, though, some sticking close to homes or porches, but most roaming around. One particular one, whom we have affectionately dubbed “Jacques,” took to following us around for a bit; and we, being the unabashed nerds that we are, decided to give him a physical exam. He was fortunately rather healthy, with only some fleas and a heart murmur apparent.

After Jacques left us, we found another furry friend, whom we named “Blue.”  He was the first dog that we had seen wearing a collar (a blue one, hence the name). Blue was quite healthy as well, and stuck with us for a while, walking ahead of us but turning back occasionally as if he were providing us a tour of the town. We passed an extremely inebriated fellow at one point, and Blue stood between us and him with his hackles raised until the man passed – how’s that for loyalty?!

Finally we decided that enough mosquitoes had had their fill for the night and decided to return to the house. We tried (really, we did) to get some work done, but I confess that we were all nodding off not ten minutes after we sat down to begin, so we just called it a night. We’re here for three weeks, anyway, right?