Veterinary Students from the University of Georgia – Learning Eleuthera Part 2 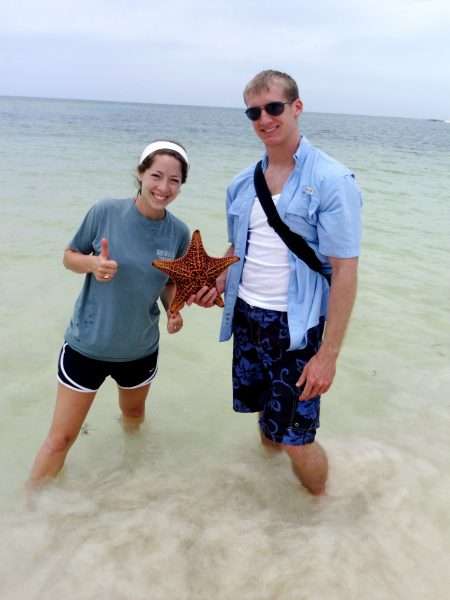 Hello, again! Not much to report here since Wednesday. Yesterday was filled with many miles of hiking to, around, and back from Winding Bay and Turtle Bay, two adjacent inlets on the Atlantic side south of Tarpum Bay. It’s strange getting used to a place where everywhere you visit is like a page of a travel brochure or commercial for a resort, but here we are. Rough life.

So after a great night’s rest, we got up this morning to meet with Phyllis Kemp, another founder of Pet Pals. Phyllis is not an expatriate like Joan, but rather a native Bahamian of European ancestry. I’ll get to why this is important soon. We mainly discussed the same topics as those that we had discussed with Joan, but it was interesting hearing them from Phyllis’ point of view. Not only is she a native, but she takes a very personal, one-on-one approach to dealing with potcakes. She told us that she makes rounds through settlements and dumps on a daily basis, setting out food in common areas for the dogs; and if she sees one that has been harmed, she will pick it up and attempt to get it cared for. If she finds a dog at the dump, she will spend time there, making multiple visits if necessary so that the dog may gain her trust, and she can bring it with her to be neutered and adopted off-island. It is commonplace for people to take a dog that has been injured or poisoned, or  newborn puppies that are not wanted, to the dump and abandon them there, hence Phyllis’ trips there.

As we spoke with Phyllis about some of the things that she sees going on here, a common theme became apparent between our conversation with her and the one that we had with Joan on Wednesday. Certainly a good deal of the examples of cruelty and neglect that they cited (many not listed here for the sake of brevity – sorry) would be considered aberrant behavior for most. Many of the less harmful points that they talk about, though, such as keeping pets outside, not letting them ride in cars, or not really thinking about preventative veterinary care, come down to the basic idea of what a “pet” really is, something which is instilled as a child and is part of one’s background and culture. Phyllis and Joan both speak about Bahamians just not understanding the issues surrounding these animals; but who’s to say who is right in this case? You or I may not agree with how things are done on the island, but who are we to come in and tell them to change? It’s the perpetual struggle of human co-existence, just repeated here as so many times before.

Phyllis’ recommendations for some of these problems were much the same as Joan’s, i.e. education and law enforcement. Interestingly, she told us of a book that she had lobbied for all about basic animal care, to be taught in primary schools around the Bahamas. She won and the book was printed, but she is not confident that it is being taught to a large extent in any schools.

Following our meeting with Phyllis, Robyn dropped by to take us up to Governor’s Harbour to meet with the island’s police superintendent, Elbert Ferguson. The purpose of this meeting was two-fold: to learn more about some of the laws already in place governing animal welfare and wildlife conservation, and what, if any, problems the police see with feral animals from the public’s point of view. See, we did a bit of searching on the Internet yesterday to see what we could pull up about potcakes, and it turns out rabies does not exist on Eleuthera. This is a primary public health concern with feral animals in the States, so if it is not here, then we want to know what other potential hazards could come out of an overabundance of feral animals.

Elbert kindly took us into his office and sat us down, then simply came out and told us that he wants to help us, but we should know that animals are not a high priority at all for the law enforcement division. Now wait, here’s where I have to tell you that on the island, emergency services work a bit differently than in the States, in that the police basically handle everything. Shaun is hard at work getting a volunteer fire and rescue service assembled and housed, but from the government’s side, the police are it, and the force is not very large to boot. It’s certainly understandable that they have a few more important tasks at hand, like looking out for the safety of the entire island.

Anyway, Elbert was very helpful in shedding some light on a few animal-related issues that knock around the Justice Department. They do prosecute some cases of animal cruelty, and to hear him put it, if they are going to arrest someone for something, there is good hard evidence against them, and they will be prosecuted – none of this legal runaround that we hear about at home. But the big problem surrounding crimes involving potcakes is establishment of ownership. The current law goes into this whole deal of establishing “sciens” (knowledge) of the animal and any potential danger it posed, etc. etc., so that essentially it can be difficult to prosecute an “owner” for any wrongdoing. Now, though, there is a push to change the law so that if it can be shown that you simply provided care for the animal, like housing or setting out food, then ownership is established and you are liable. This change in the law comes in the wake of several vicious dog attacks around the islands recently. We get the impression that dog fighting is common here, and one other public health concern is of fighters releasing these fighting dogs and allowing them to breed into the potcake population, creating potcakes with a more territorial sort of predisposition.

Concerning wildlife, The Bahamas does work closely with CITES, the Convention on International Trade in Endangered Species of Wild Flora and Fauna, to keep a handle on wildlife exploitation. There are fishing seasons in place for species at risk of over-fishing, such as the Nassau grouper and the spiny lobster (the largest food export of the country); and outright bans have been placed on fishing very pressured species, namely sea turtles and sharks (the latter spawned by a increasing popularity of poaching for fins). Elbert told us that the police do what they can to enforce these laws, but compliance is always a problem, more from international sources than from natives.

Following the second meeting and a lunch of conch burger in Governor’s Harbour, the rest of the afternoon was spent at…you got it, the beach! After being caught in a fantastic storm (it’s amazing how quickly they come up out here), and a pleasant final dinner with the Hendricks folks, we spent a rainy evening inside working on our guide and reading. We’ve been pretty successful in finding a good number of species of animals (mainly fish and sealife, of course) to include in the guide, but we would really like to head up to the Levy Plant Preserve in Governor’s Harbour next week to find out more about plant life on the island. We don’t have anything on the agenda for this weekend at this point, so I think most of it will be spent on the guide and exploring what we can around the town. So, until next time, friends!