Veterinary Students from the University of Georgia – Exploring the North 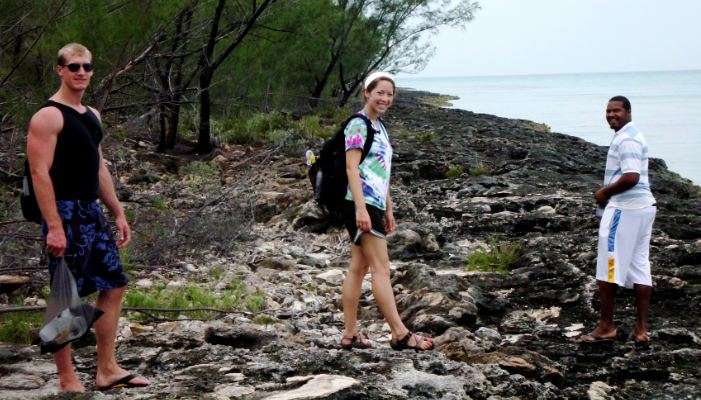 We went rogue again, but this time we decided that “hiking” wasn’t really going to work out for us.  We rented a tiny Honda and planned another 48 hour adventure.  This time, we were going North.  Fortunately for us, we were blessed to discover an ABBA CD in the console of the rental car.  I confess that I can now sing every word to every song on ABBA Gold.

We headed straight for Preacher’s Cave.  That’s where the Eleutheran Adventurers settled after being shipwrecked out on Devil’s Backbone reef.  We hopped around on the rocks and explored the woods and nearby beach.  We could have spent all day on that beautiful beach, but we wanted to try to fit in a visit to Harbour Island before heading back home for the night.  We took a water taxi to the island and spent the next few hours wandering around the golf-cart riddled streets.  We stopped by a few shops and realized that our palm leaf baskets and roses were nowhere near the quality of the purses and hats for sale there.  All in time, all in time…

We tried unsuccessfully to get a “cheeseburger in paradise” at Ma Ruby’s, but ended up finding some just as delicious at a little roadside stand.  We made our way to Pink Sands Beach.  That’s another beach we could have spent all day enjoying.  But, again, we had miles to go before we slept.  So we ambled back to the water taxi and headed south.  We crossed Glass Window Bridge, where the Atlantic and Exuma Sound are both visible at once, and parked the car at what we thought was “the Cow and the Bull” – two large boulders that were tossed up onto the cliffs during a particularly strong storm.  We spent a good deal of time circling those rocks, trying to understand just which one was the cow and which was the bull, and whether these were even the correct rocks.  That was when we scanned the terrain to the south of us and noticed the Queen’s Bath.  Ah, this elusive Heritage Trail site was within walking distance!  So we hiked along the rocks until we were looking down into the shallow pools filled with sun-warmed water.  Travel guides suggest that you spend some time relaxing in the warm pools.  Sure, we were up for that.  So we hiked down the rocks and took a look into the first pool.  Urchins!  These pools were, in fact, nurseries for the world’s tiniest sea urchins and hermit crabs.  While fascinating to look at, I would not particularly enjoy a bath in a sea urchin nursery.

We stopped to watch the sun set over the Exuma Sound on our way back to Tarpum Bay.  The next morning, we woke up early and loaded up the car for another trip north.  This time, our first stop was Hatchet Bay Caves.  This is a network of underground caverns that is said to stretch for one mile under the fields and shrubland above.  We entered the cave and followed the guide line through the dark caves until we reached a large hole marked by dooming graffiti; “Welcome to Hell”, in red, dripping spray paint.  Ah, a very warm welcome.

We descended further in the cave, and were saddened to find that the graffiti seemed to get worse the further along we went.  Some of it was actually charcoal script from the nineteenth century.  These caves have been around for millennia, and apparently have always been a popular hangout.  We snuck off into a side chamber, turned off all of our flashlights, and experienced total darkness and quiet.  Not a sound.  Not a sight.  Just when it was becoming all too eerie, Nicole dropped her light and we had to turn ours on to help locate it.  I was relieved, I have to admit.  We climbed a rickety rope ladder out of the caves and popped up in the middle of a field.  There were no paths or roads indicating the way back to our cars.  We struck out in the direction that felt somewhat right.  After a few minutes, we located a road that eventually led back to our little Honda.

We spent the next few hours searching for Surfer’s Beach.  We had an excellent map, but for some reason the beach was nowhere to be found.  Disheartened, we ended up stopping off on the side of the road in Governor’s Harbour and trekking through someone’s side yard to find a beach – any beach – where we could snorkel a bit before the rain clouds rolled back in.  Nicole and I busied ourselves by digging a gigantic hole in the sand, while Brad snorkeled out and around a rock island.  We were beginning to think that a shark had finally found him when we no longer saw his snorkel sticking out of the water between the island and the shore.  Then we turned to see him walking along the beach behind us.  How he manages to disappear and reappear like that is beyond me.  He reports seeing a sea turtle on this snorkeling adventure.  I am pretty jealous about that, but am not feeling like facing that giant shark in order to see a sea turtle.

The final stop of the day was Ocean Hole in Rock Sound.  We made it there before the rain did, and perfected our cliff-jumping technique as we launched ourselves into the bottomless pit that even Jacques Cousteau could not find the opening to.  Ocean Hole has recently undergone a makeover, and is now beautifully landscaped.  It would make a great place for a picnic and a swim.