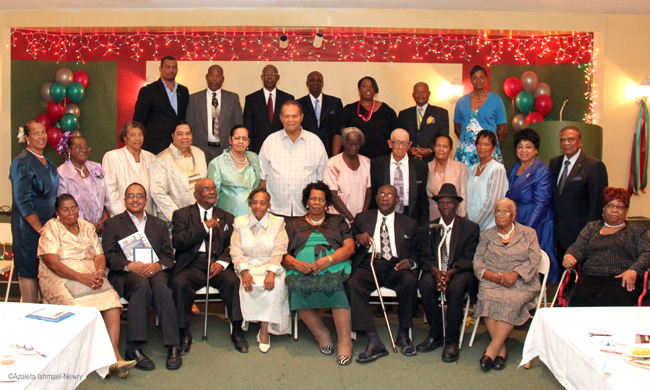 Tarpum Bay, ELEUTHERA, Bahamas – For The Eleuthera Arts and Cultural Center, the Tarpum Bay Historical and Heritage Society, and the Tarpum Bay Township, it was a time to celebrate history and accomplishments. The Tarpum Bay Heritage and Historical Society (TBHHS) had been formed a few years ago to preserve the history and heritage of their settlement and the lead project was the renovation of the All Age School to a cultural center.

On November 24, 2012, forty-seven seniors were recognized for their contributions to their community.  The evening before, a celebration of the “Renaissance of the Lil Prep” (All Age Prep School) with its 200-year old history to birth of the new Eleuthera Arts and Cultural Centre (EACC) took place. The project was co-chaired by the local township chairman, Cleveland Knowles and prominent businessman, Eugene Carey.

The seniors included a handful of persons who helped mold the Bahamian heritage and culture of this seaside settlement, located in South Eleuthera. They were fishermen, farmers, tradesmen, housekeepers, homemakers, teachers, entrepreneurs, pastors, statesmen and others. Many other persons who now reside in Nassau and elsewhere were instrumental in Tarpum Bay’s development, however, these celebrations focused on local persons residing there today.  Special recognition was also given to the Right Honourable Perry G. Christie, the Prime Minister of The Bahamas who resides in Nassau, the nation’s capital and whose ancestry is from Tarpum Bay.

“For over half a century you have contributed and are contributing in so many different and valuable ways to the community,” said Metta Macmillian-Hughes, a Nassau lawyer who spent her early years in Tarpum Bay and visits often. “You are the parents who have raised, inspired and encouraged your children and grandchildren to rise to greater heights, to strive to excel, and to live as upstanding members of the community, guided by Christian principles, respect and compassion for others.” McMillian-Hughes herself was delighted to see 83-year old Pricilla Clarke, a housekeeper, who had babysat her as a child, receive her plaque, as well as the many others she knew as a child.

Over 175 local persons and visitors attended the awards banquet that was no ordinary affair. Two statesmen were recognized and included the Honourable Oswald O. Ingraham, a former speaker of the House of Assembly and former MP for Central and South Eleuthera who is also a businessman in Tarpum Bay.  The other was the Right Honourable Perry G. Christie, Prime Minister of The Bahamas. His mother, Naiomi (Allen) Christie was a nation builder and one of the women in the Women’s Suffrage Movement who also hailed from Tarpum Bay where doctors, lawyers, entrepreneurs and other successful individuals were born.

Tarpum Bay’s Vera Carey was the eldest at 96 years of age and George Edwards, 70 was one of the youngest recognized at the banquet and they beamed with pride.  Almost the entire group had links to the All Age School, later known as the Lil Prep, where they attended as school children and many had taught there.

“The Little Prep represents Tarpum Bay,” said the Honourable Damien Gomez, “And we are here to celebrate our community.  If it were not for the community, we would not be here.”  Gomez spoke about his parents who were from Eleuthera and the imparting of their knowledge to him and others. He also accepted the award that was given to the Prime Minister, on his behalf, and thanked the TBHHS and EACC for their work and reaching out to the young people of The Bahamas. Cleola Hamilton, MP and Parliamentary Secretary to the Ministry of Foreign Affairs also attended and presented.

Restoration to the All Age School (Little Prep) was necessary because it had been abandoned and lay derelict for almost 16 year. Just over two and a half years ago, the Tarpum Bay Historical and Heritage Society, under the direction of Eugene Carey, Cleveland Knowles and Shaun Ingraham set out to undertake the refurbishment, whose construction was lead by Paul Knowles and Ian Carey.

In 2009, to the kick off restoration project, 65 members of the Clemson Wesley University group were on an alternative spring break arranged by Island Journeys, and together with the locals, they began the renovations.  “A lot of volunteer labour, hard work, pride and financial support went into the restoration. Without the donations and support of locals, visitors, second homeowners and corporations, the reconstruction would not have been possible,” said Shaun Ingraham.

Eugene Carey, a long time resident and businessman of Tarpum Bay who is one of the co-chairs of the Tarpum Bay Historical and Heritage Society shared his views.  “The Prep is considered one of the most important buildings in this small quaint waterfront town ship. Almost everyone who is a senior in this town was educated there. It has a lot of history and a lot of successful people had their start there.”

Today, the Lil Prep has been refurbished to the Eleuthera Arts and Cultural Center (EACC) and currently has ongoing construction for an amphitheatre with a stage.  Audrey Carey who runs the EACC was instrumental in the weekend celebrations and encourages persons to visit.

At a welcome reception at the EACC the evening before the awards banquet, “The Renaissance of the Lil Prep” was celebrated to recognize individuals 70 years and older residing in Tarpum Bay, in appreciation for their outstanding contributions to the life and history of the Lil Prep, and the development of the Tarpum Bay community,” said Clevland Knowles, also a co-chair of the TBHHS and chairman of the local township.

Key contributors and donors as well as others who assisted with the Prep project were highlighted and some included: The Windermere Island Foundation; Toni LaBoiteaux; Steve and Mary Graves; the Burton Morgan Foundation; Metta McMillan Hughes; Paul Knowles; Ian Carey; Jerry Ewes and Marjie Findley.

The vision for the transformation of the Lil Prep was to make it a place where persons young and old, could gather to learn arts and crafts or take in a play, workshop or seminar. The EACC maintained many of the original elements of the All Age School like the stone stairway that led to the school or pieces of the original walls.

The Eleuthera Arts and Cultural Center has become a hub for many conversations and educational entities. Over 8 decades ago, Vera Carey had attended school at the Lil Prep until grade 6 and then taught there. She said that today she was happy to have been able to celebrate the restoration and noted that the renovation of the old ruins is “now a beautiful site for sore eyes.”

For more information on the honourees and the banquet, visit facebook: “Tarpum Bay Historical & Heritage Society – The Lil Prep School” and “Eleuthera Arts and Cultural Center.”