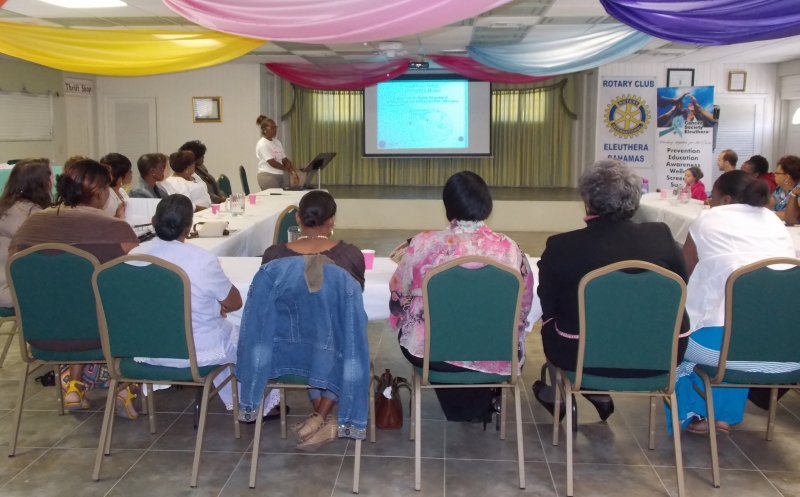 On Saturday March 8th, The One Eleuthera Foundation hosted a Pink Ribbon Breakfast which was held at The Cancer Society of Eleuthera Wellness Centre. The event brought together 34 ladies who each donated $10 towards the breakfast. The guest presenter was Nurse Sherrin Cooper who spoke on healthy lifestyles with special emphasis on eating right and exercising. The “Breast Cancer in The Bahamas” PowerPoint presentation was given by One Eleuthera’s Community Outreach Coordinator, Maisie Pinder. Questions followed both presentations which indicate great interest from the audience.

Also participating in the session were several breast cancer survivors. Natalie Petty, Orlean Brown and Nicole Lewis shared a bit of their experiences. Other survivors present were Willow Williams, Millie Johnson, and Vandora Johnson.  A local dance group called “Conquerors for Christ” performed a tribute to the survivors, dancing to the song “Smile” by Kirk Frankly. Also bringing greetings at the gathering were Juanita Pinder, President of Cancer Society and Ismella Davis, Superintendent  of Police for Eleuthera who lost her mother to breast cancer some years prior.

Surveys taken indicate that the women care about their well-being. They all pledged to continue to take note of any changes with their bodies and do regular screenings.

Following the event some of the women did a short tour of Eleuthera Community Farms located at the immediate rear of the Cancer Society of Eleuthera Wellness Centre.

Note: One Eleuthera COC position is funded by a grant from Susan G. Komen.