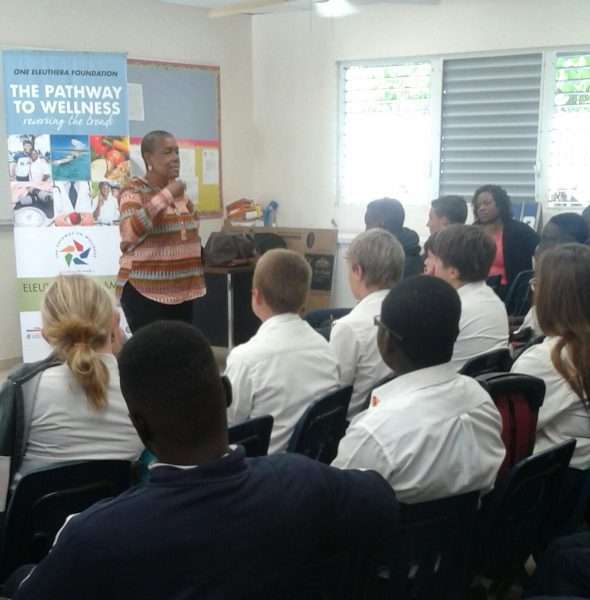 In keeping with The Department of Social Services’ recognition of April as Child Protection Month, One Eleuthera Foundation (OEF) and Female Empowerment Movement (FEM), in their efforts to support our youth, designed an intervention campaign for all Eleuthera high schools. These sessions took place Monday, April 18th to Wednesday, April 20th.

Mrs. Donna Nicolls, trained counselor with the Bahamas Crisis Center (BCC) and founder of the Bahamas Woman’s Watch (BWW) was invited to address the topic of healthy relationships. Her talk touched on subtopics like teen violence, sexting, suicide, abuse and violence in general.

More than 700 students’ lives were touched. The response from them was overwhelmingly positive as they were fully engaged in each session and even asked questions afterwards. Mrs. Nicolls stressed the fact that she was specifically giving information for each of them to process and incorporate where needed in their own lives.

Additionally, on the evening of April 19th, a public session was held at the Wemyss Bight Primary School for a more mature audience. During this session, the short film produced by BCC, ‘Full Circle’ was shown. The film depicts various societal issues such as incest, rape, bystander’s behavior and domestic violence. This preceded to a healthy discussion between Mrs. Nicolls and the audience.

Joining Tuesday’s session were Apprentices from the newly launched program at Centre for Training and Innovation (CTI). This session served as extra credit under their Personal Empowerment training.

At the end of the vigorous island wide tour, Mrs. Nicolls felt that some notable breakthroughs were made. She felt that both the student and the adult sessions were productive. Event coordinator, who serves as outreach person with the One Eleuthera Foundation, Maisie Thompson also received positive comments from students and also from persons attending the public forum. The One Eleuthera Foundation continues to partner to build our Eleuthera communities and cultivate good Bahamian citizenship.