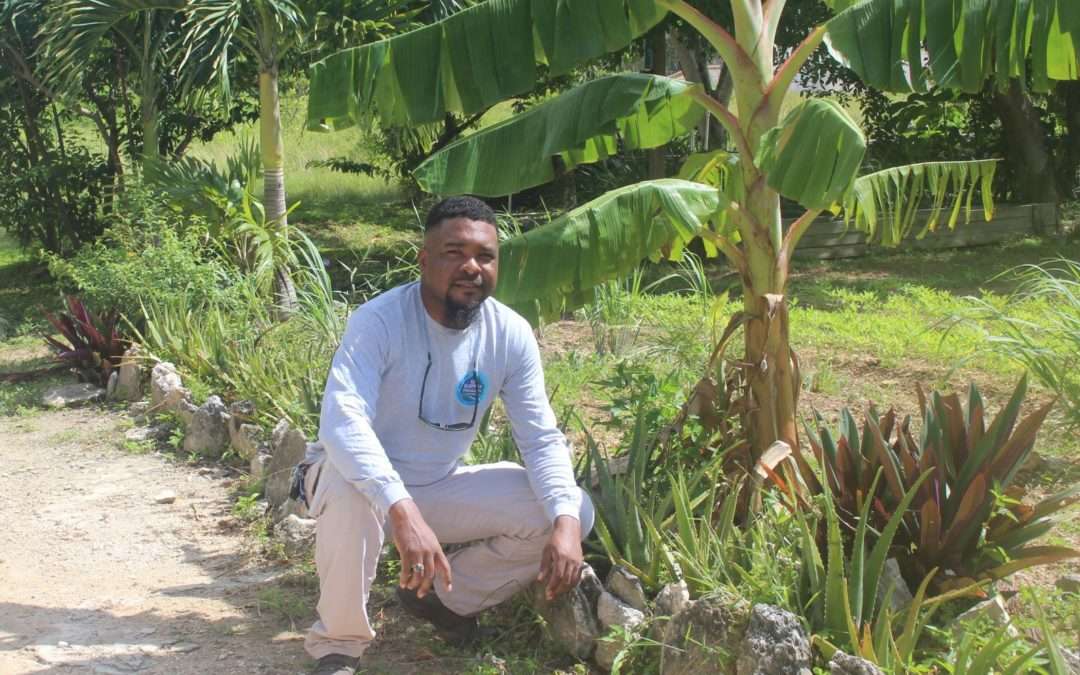 Deon Da Costa Gibson, the Agricultural, Extension & Livestock Manager at One Eleuthera Foundation’s Centre for Training and Innovation (CTI) has received the “Soul of Rurality” award from the Inter-American Institute for Cooperation on Agriculture (IICA.) Identified as a “Leader of Rurality,” of the Americas, Gibson has received international recognition for fostering resilient agriculture and promoting the increase of local food production and consumption to reduce the dependence on food imports in the country and region.

IICA’s “Soul of Rurality” award serves to acknowledge and honour people in rural communities throughout the Americas who are actively leaving their mark on the world and making a difference in food and nutrition security, and the environmental sustainability of our planet.

For most of his adult life, Gibson—also known as “Gibby da Farma”—has been an advocate for the local farming community and has endeavored to share his time, passion, and expertise in assisting, educating, and training fellow farmers and sharing industry best practices.

Growing up in Nassau, Gibson had an affinity for visiting farms and observing livestock during his early childhood years. These experiences fueled his desire to participate in the industry and pursue tertiary education at the Agricultural University of Havana, Cuba, and later Sterling College in Craftsbury, Vermont, a school specializing in environmental studies and sustainable agriculture.

“Many would ask me why I wanted to study agriculture given the many difficulties facing the activity,” he explains, “and I would say that when you can prepare an omelet with the eggs you collected or when you harvest with your own hands the tomatoes or peppers you are going to eat, that is when you begin to see agriculture in a different light.”

Gibson is also the proprietor of “Gibby da Farma Backyard Gardens and Agricultural Consultancy,” a company that advises small food-production enterprises. He is a regular contributor on national radio shows, forums, and programs, where he represents the views and interests of the local farming community and uses his personal social media platforms to promote his work.

Promoting Sustainability in Eleuthera with CTI

In 2019, Gibson joined the CTI team after transplanting from Abaco in the wake of Hurricane Dorian. Seeing firsthand the impact a natural disaster can have on the food supply and livelihoods of people in rural communities, he aligned his work with CTI’s mission to develop and promote sustainable farming, increase food security, and strengthen local farmers and farming initiatives.

A good deal of Gibson’s work at CTI focuses on empowering and providing technical support to local farmers, as well as collaborating with high schools across Eleuthera to provide ongoing agricultural education. He firmly believes in educating the youth on the significance of agriculture and attracting them to the sector, recognizing the importance of their role in the longevity of any agricultural sustainability plan.

“Without farming and farmers,” he notes, “humanity would not survive. The best way to involve young people in farming is to teach them to have patience to wait for harvest and to show them the fruit of their work”.

On the CTI farm, Gibson manages egg production for over one hundred chickens, oversees the apiary, and runs a monthly farmer’s market. Here, community farmers and growers are invited to promote and sell their crops and value-added products. Getting nutritious, homegrown produce from the ground to the tables of those who live in the surrounding communities while increasing the profitability of local farmers is a win-win for him.

This month, CTI and the One Eleuthera Foundation will break new ground with the highly anticipated first planting of its 1.1-acre, revolutionary, retractable grow house. This undertaking will position the farm to substantially increase the island’s food production and expand farmer training opportunities.

The facility will introduce year-round growing of leafy greens and other produce in a controlled environment, protected from extreme climatic conditions. Gibson looks forward to supporting the project, which can restore Eleuthera’s rich farming legacy while providing local communities with greater access to the nutritious, responsibly grown food they deserve.

Capturing the Soul of Agriculture

IICA specializes in agricultural development among its member states with a focus on rural well-being and food sustainability but also plays a leading role in agriculture-based technology and innovation, food safety and quality, rural development, and resource management. This award affirms their commitment to celebrating stalwarts like Gibson who seek to bring greater focus to agricultural education, collaboration, and cooperation within their communities.

Gibson is one of the prominent faces and ambassadors of IICA’s “Buy Fresh, Buy Local, Buy Bahamian” campaign launched over a decade ago. It’s an initiative he endorses, maintaining the idea that any country, no matter how small, has the capacity to produce its own food—if the correct policies are put in place regarding the local food production and consumption and if there’s buy-in from the private sector.

Gibson sees agriculture as a tool for national development and recognizes the important role food security and food sovereignty play in the stability of a country’s economy and future.

About One Eleuthera Foundation

Founded in 2012, One Eleuthera Foundation is a community-based non-profit organization dedicated to transforming our local island communities into thriving, self-sufficient ecosystems. We do this by focusing on five key areas: economic ownership, meaningful educational advancement, pathways to wellness, and environmentally sustainable communities centered around our island’s unique cultural identity. We run a number of social enterprises, including CTI, our vocational school; the Retreat Hotel, a training hotel for hospitality students; and our farm and Cooling House, which trains future farmers in the best sustainability and food production practices. Through OEF’s consistent dedicated efforts, the tenacity and resourcefulness of our legacy community, and the support of donors and partners, we are creating change in Eleuthera.

Give Today
Read Our Shared Vision