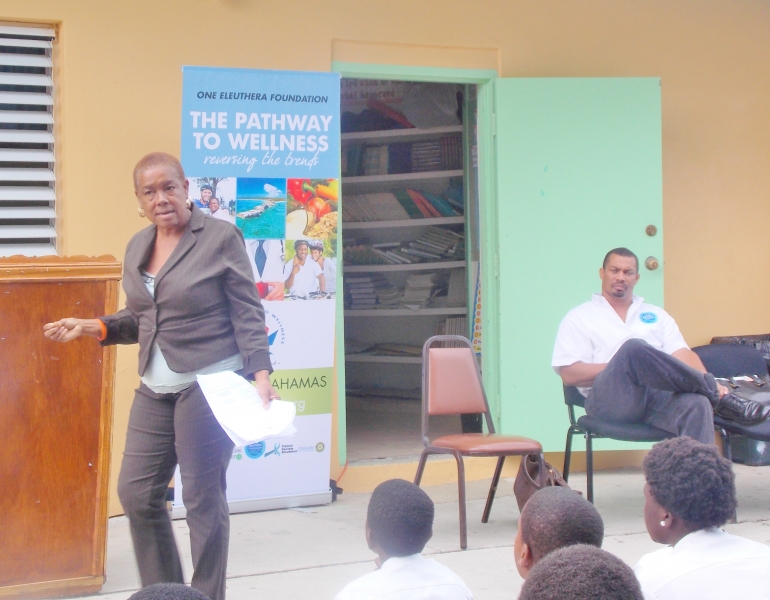 The One Eleuthera Foundation (OEF) invited and hosted a representative from the Bahamas Crisis Centre (BCC) in the person of Mrs. Donna Nicolls on Eleuthera, March 13 and 14, 2014. Together the partnership spare headed a Healthy Relationships Campaign visiting each high school. For the duration of the two days, the team visited a total of five high schools and also hosted a community parent forum in Governor’s Harbour where Mrs. Donna Nicolls was the featured presenter.

During her talk with the children, Mrs. Nicolls suggested that each of them should identify a trusted adult whom they can confide in. She told them that if they are involved in any type of relationship that has to be kept ‘secret’ it is an unhealthy relationship and likely bad for them. She touched briefly on other issues that young people are faced with such as violence, bullying, abuse, incest, prostitution, suicide, stalking and the likes. The children were made aware of their access to the toll free hotline which is provided by the Bahamas Crisis Center and is available 24 hrs. The One Eleuthera Foundation recognizes the present challenges and are committed to providing a hotline that will be available on Eleuthera  in the not so distant future. Very soon, there will also be trained counselors available to man the hotline and also provide other assistance to those needing it. Basically the same message/ information was given to all students at each of the high schools visited.

The Healthy Relationships Campaign began at Preston  Albury High School at 9am Thursday morning where Mrs. Nicolls addressed the entire student body exclusive of the 12th graders who were all off campus on work experience.  The children at P.A.H.S. were very receptive to what was said and participated in a healthy dialogue with Nicolls asking questions and commenting on points of interest. Following the session with the students, Mrs. Nicoll’s was asked by Mr. Jones, the school’s principal to sit in on a parent conference meeting to help sort out an issue with a few students who were involved in an altercation which occurred the day before.

Sessions continued at Winderemere High around noon and then on to Central Eleuthera High School.

At 7:30 p.m. Mrs. Nicolls addressed a community forum which consisted of parents, teachers, pastors and youth leaders. She spoke of the various issues that our young people are dealing with and tried to get the adults to better understand them and how to better deal with resolving their issues. Right at the start of her presentation, Mrs. Nicolls made it clear that our children are in crisis and need positive adult mentors. They mimic what they see from the older folk. We, the older generation is partly responsible for their behavior and we, the adults need to make an attempt to correct it. The adults and Mrs. Nicolls had a great and interactive session.  Shaun, CEO of One Eleuthera Foundation wrapped up the session by informing the audience of the organization’s plans to provide training for persons to manage a crisis hotline on the island. Shaun stated that there is nothing funny about abuse and we should not tolerate it on any level. The forum ended on a positive note as persons expressed their appreciations to OEF and Mrs. Nicolls for staging such an event.

On Friday at 9 am, the Healthy Relationships Campaign moved to the northern end of the island. The first stop was at North Eleuthera High School. This session was very engaging as students were very interactive with the councilor.

The next and final stop was Harbour Island All Age school.