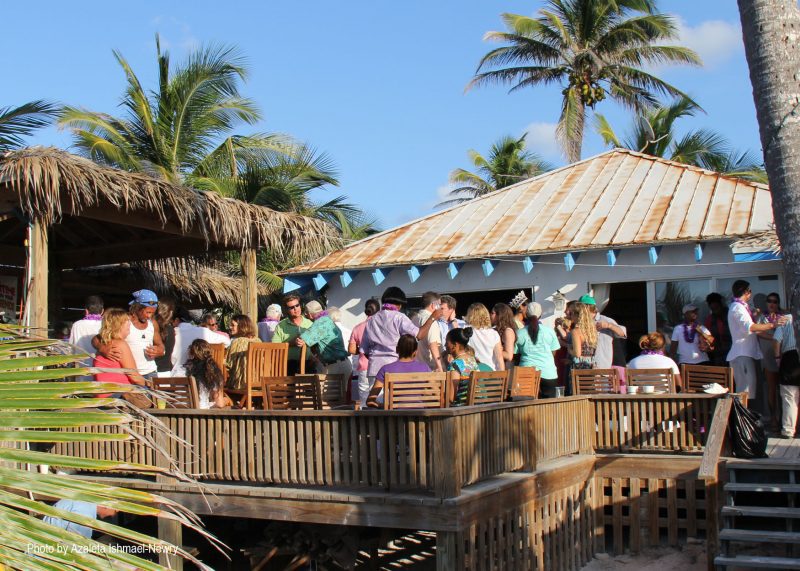 Eleuthera, Bahamas – Earth Day 2012 celebrations in Eleuthera took on a whole new transformation where dreams, vision and collaboration were some of the successful ingredients that made it one, like no other. Six figures were invested into this project and as people learned more about the One Eleuthera Foundation, verbal pledges were committed towards signature projects on the Island. Branding Eleuthera as a cultural and heritage destination with a goal to ensure all development on the Island stays in scale with nature was solidified.

Taking place this past April 20th to 22nd, the “Jammin’ For Nature, Earth Day Weekend” was originally started by The Nature Conservancy as we felt that Eleuthera provided the backdrop to celebrate conservation achievements at the local level,” said Eleanor Phillips, Program Director of the North Caribbean Program at The Nature Conservancy. “We partnered with the “One Eleuthera Foundation” (www.oneeleuthera.org) because they have these goals at heart and together, we are working towards building a sustainable Eleuthera.”

Other partners who supported the events included The Island School, BREEF, Eleuthera Land Conservancy, Bahamas National Trust, Leon Levy Native Plant Preserve, Coastal Awareness and the Ministry of Tourism.  “Eleuthera became a magnet because of what it has to offer through culture, heritage and conservation initiatives and this made it the perfect place to highlight Earth Day,” said Phillips.

Five great events celebrated the initiatives of the partners and more than 100 volunteers and workers shared their passion, energy and skills to create quality experiences for locals, visitors and second homeowners who continuously commented that the events surpassed their expectations.

To kick off the celebrations, a Welcome Party started at 4 pm on Friday afternoon at The Beach House in Governor’s Harbour.  It was there that the founder of the One Eleuthera Foundation and native Eleutheran, Shaun Ingraham recognized key persons and introduced the philosophy of One Eleuthera.

On Saturday, the branding of Eleuthera as a cultural and heritage destination was highlighted with the launch of the “Eleuthera Heritage and Conservation Trail” that encompassed two tours – a North loop and a South loop. The Trail, a collaboration of One Eleuthera, the Ministry of Tourism, The Nature Conservancy and The Bahamas National Trust was diverse and participants who took the tours said it was an enriching experience.

Children from the Emma Cooper Primary School who completed the Southern loop finished at the Island School where they met  H.E. Sir Arthur Foulkes, the Governor General of The Bahamas and his wife Lady Foulkes.  Sir Arthur and his wife, Ambassador Hu Shan and Senator Lynn Holowesko were there for the opening of  the newly built Hallig House (named after Bobbie Hallig) that is based on green principles and was a tribute to Earth Day and the One Eleuthera Foundation’s celebrations.

Meanwhile, the “One Eleuthera Cultural Exposé” in Bay Front Park that started at noon and continued into the evening was teaming with activities for all ages.

Sculling races with the Sands boats created nostalgia and there were newcomers to the sport.  Sculling is being revived by Jimmy Sands and GeorgeKelly and the boats are traveling to the various regattas throughout the Family Islands. Built primarily with native wild Tamarind from the local forest, Sheldon Gibson and his team constructed the five hand-made boats in Nassau.  Not only do the boats exemplify the craft of old fashioned boat building but also sustainability and recycling principles.

More cultural diversity was appreciated with local music and performances from “The Rum Runners,” “Island Flavour,” the

Environmental organizations like the Nature Conservancy, BREEF, BNT, the Leon Levy Native Plant Preserve (LLNPP) and the Island School focused on education relating to the environment and visitors were able to purchase eco-friendly items.  The Bahamas Cancer Society brought awareness to various health issues while One Eleuthera concentrated on membership and fundraising and the Sands Beer and Bacardi stall contributed to raising funds.

The unity and heritage of the Island’s various settlements was showcased through the artisans, handicraft vendors and bush medicine specialist; all who came from The Bluff, Lower Bogue, James Cistern, Governor’s Harbour, Tarpum Bay, Weymss Bight and Deep Creek.

Also that afternoon, the One Eleuthera Foundation was officially launched by its CEO and co-chairman, Shaun Ingraham who encouraged people toremember three key guiding principles of One Eleuthera – strengthening, connecting and planning.

“We will work at strengthening all of our communities; connect the Island –  from Harbour Island to Bannerman Town to Powell Pointe; and we are going to plan for the future,” he explained.

Dignitaries and guests who attended the Launch included H.E. Hu Shan, Ambassador to the People’s Republic of China to The Bahamas, David and Dana Jea of the US Embassy in Nassau,  Luci Baines Johnson, daughter of former US President, Lynden Baines Johnson and her husband Ian Turpin.  Philanthropist and creator of the LLNPP, Shelby White, Miss Earth Bahamas, Kerel Pinder and Ministry of Tourism representatives were also present as well as members and trustees of the Nature Conservancy’s Caribbean Board and Chris and Pam Maxey founders of the Island School.

Artists who enriched the weekend’s activities included Barbara de Vries who was featured in the “One Beach” documentary (available on youtube.com). Her work exemplifies recycling and sustainability through her collection of “Plastic is Forever” jewelry designs, tees and accessories.  Some of the Items sold that weekend were made at the “Eleuthera Arts and Cultural Center” in Tarpum Bay with local artisans.

Antonius Roberts, our nation’s premier sustainable artist was featured at Sunday’s “Birds, Bagel and Brunch” at the Leon Levy Native Plant Preserve where he spoke about his work and commitment to the environment. Antonius began the National Bench Program that recycles wood from the invasive Casuarina tree that is used to make benches by young men in Nassau and Eleuthera. Also in attendance was artist, Kevin Cooper who displayed his oil paintings.

Brendalee Petty, a gospel singer, dedicated some of her songs to the morning venue with lyrics focused on the environment and protecting our Bahamaland. It was her mother, Olive Petty who introduced the medicinal uses of Bahamian roots and herbs to Shelby White who later wanted to preserve those traditions and the trees that were readily cleared by developers.  Shelby partnered with the Bahamas National Trust and together with other partners and dedicated persons, they created the magnificent 25-acre Preserve in Governor’s Harbour.   Visitors enjoyed tours given by Dr. Ethan Freid, chief Botanist, Mark Daniels and other BNT staff members.

For the grand finale, event number five was called “Picnic for The Planet” and was sponsored by The Nature Conservancy and

Cocodimama Resort. Guests were entertained by “Ellie the Belly and the Haitian Sensations” in a relaxed and casual atmosphere. Picnic for the Planet was a worldwide event and the Eleuthera party coincided with celebrations in Nassau that took place at the New Providence Community Church.  Cool 96 FM made a live broadcast and they had also covered part of the Cultural Exposé the day before.

“Bringing together people, resources, and expertise to develop opportunities for all Eleutherans to prosper” is a key component of One Eleuthera. The weekend celebrations was a strong catalyst that not only brought people together but strengthened communities and helped persons to sustain their livelihoods,” said Ingraham.

One Eleuthera “Sees a path to the future as one founded in empowering communities by building upon their unique qualities, branding the Eleuthera experience, connecting each settlement through Island-wide heritage tourism, and preparing and establishing guidelines for future sustainable development.”

The Shared Vision for South Eleuthera, which was first commissioned by Friends of Lighthouse Point to develop a sustainable plan for not only Lighthouse Point, one of the most treasured landmarks on the Island, but also other special heritage and conservation sites on Eleuthera inspired the formation of One Eleuthera. Michael Singer Studios (www.michaelsinger.com) worked along with Friends of Lighthouse to produce the report.  The signature projects planned for the Island and the goals of the Foundation can be found at www.oneeleeuthera.org.