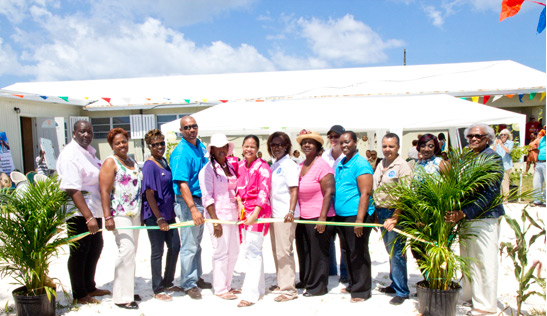 A partnership of the One Eleuthera Foundation (OEF), the Cancer Society Eleuthera (CSE) Branch and Dr. Tricia and Sameer Bhatti of Philadelphia, PA, is paving a pathway to providing healthier options for Eleutherans. It is the next step in the One Eleuthera Foundation’s role of Reversing the Trends, moving us two steps closer to wellness. In attempts to change the present health statistics, Saturday April 5th marked the launch of Eleuthera Community Farm & Deli. The project began with CSE and OEF agreeing that we can no longer continue to just treat illnesses, but we also need to prevent them. The Bhatti’s could not agree more and decided to make an investment in the future health of Bahamians by making a generous donation while on a brief visit to the island in November of 2013.

Sameer, himself a Bahamian returning home and recognizing the challenges that we have obtaining good, fresh fruits and vegetables said that, “ most foods found on the store shelves are NOT our friend.”

What better location for such a project than at the Cancer Society Wellness Center located at palmetto Point?

With the land cleared, seeds in ground, the produce began to grow yielding first vegetables such as arugula, spinach, kale, etc to create the healthy and tasty garden salad served at the Cancer Society’s 1st Annual Hope Ball on March 1st, 2014.

Some five (5) months after their initial visit, Sameer and Tricia, as they became affectionately known, returned to the island for the official launch ceremony of the project that took place on the grounds of the Cancer Society Wellness Center, on Saturday . Scores of well-wishers and supporters gathered to celebrate the auspicious event. The exceptional ceremony featured renditions from youngsters of the surrounding communities. Taking part were: Agape House Pre-School, Conquerors for Christ Dancers, Palmetto Point Methodist Church Children’s Choir and National Band Competition Champions, the reknowned Central Eleuthera High School Band. Healthy meals made with organic produce from the farm were available throughout the day. Also, persons were able to make purchases of farm produce and healthy salad dressings while sampling a variety of bush teas.

The farm and deli managed by Sherry Fax, “The Sexy Farmer”, will be operated by the CSE, comprising a network of farmers known as Eleuthera Community Farms (ECF)- with the OEF managing this overall network through a collective known as CSA (Community Supported Agriculture). In addition to other farmers being included in the process, individuals will be able to get involved as well. The idea is to create a network or CSA. CSA are becoming very popular in America. It is known as “farm to table”, providing customers with fresher, organic food. Some sites will be farms and others will be both farm and/ or deli. It is hoped that persons on Eleuthera will rethink their whole diet and make much healthier food choices. As said by Shaun Ingraham, CEO of the One Eleuthera Foundation (OEF), “a new revolution has begun, starting from the ground up.”

Ms. Jacqueline Gibson, Vice President of the Eleuthera Cancer Society; Mrs. Maisie Pinder, Community Outreach Coordinator for with the One Eleuthera Foundation and Susan G. Komen; Mr. Shaun Ingraham CEO with the One ELeuthera Foundation; and Mr. Sameer Bhatti all gave breif reflections on how the realtyof the garden came to be and they expressed how proud they were, to be a part of this new milestone at the Wellness Center and iterated how important it is to eat healthy. Mr. Ingraham also shared that in 2013, the clinics across Eleuthera saw a startling 27,000 patient visits. He said their aim was to reduce this number as each year goes by.