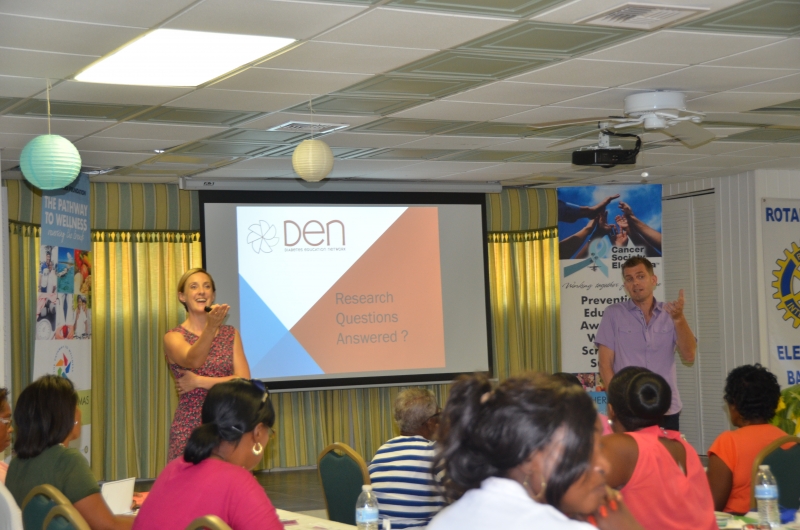 Eleuthera, Bahamas – According to the International Diabetes Federation, one person in the world dies every six seconds from complications due to diabetes.  In 2013, diabetes accounted for more than 1.5 million deaths worldwide. There are currently over 382 million people are affected with diabetes. This number is hiking at an alarming rate and is expected to increase to nearly 600 million by 2035.

A Communicable Disease Prevalence Study conducted in The Bahamas in 2005 recorded 23,000 pre-diabetic Bahamians and 32,000 diabetics. Just six short years later (2011), a similar survey indicated that the number of cases had increased exponentially, sighting nearly 28,000 pre-diabetic Bahamians and over 62,000 diabetics. These were only a few of the startling statistics presented by Dr. Graham Cates, of Family Medicine Center.

Such frightening data set the stage for the discussions at One Eleuthera Foundation’s (OEF) 3rd Annual Health and Wellness Symposium, The Pathway to Wellness: reversing the trends, focused this year on diabetes.

The two day event began with a Health Fair held on the grounds of the Hayne’s Library in Governor’s Harbour on Thursday July 31st.  The Fair was comprised of information booths, health screenings (blood pressure, blood glucose and BMI), salad and green smoothie demos using greens from Eleuthera Community Farms (ECF), native teas and a health talk by nutritionist, Camelta Barnes from the Department of Health. This new feature to the symposium was designed to create a forum for the general public to be sensitized to diabetes and the benefits of healthy food choices.

Gleaning from this ‘healthy spread’ were a number of adults, but the majority of the crowd consisted of over 60 youngsters ranging from ages 4 to 16. Mrs. Barnes had everyone intrigued with her message on making good food choices verses bad food choices and the dangers of too much sugar.  The youngsters were eager partakers of the healthy green smoothies and garden salads. Later in the evening, symposium guests were hosted to a welcome reception at the Cancer Society Eleuthera Wellness Center. This evening was sponsored by Rotary Club of Eleuthera.

Throughout the Symposium, several risk factors were identified, determining the reasons why people are developing diabetes. Lifestyles, genetic predispositions, weight, poor food and liquid choices and minimal to no physical activity were among those named.

Dr. Silver placed emphasis on the connection between obesity and diabetes. As body mass index goes up, so does the risk for developing type 2 diabetes. She noted that with intense lifestyle changes and medication, type 2 diabetes could be prevented or delayed. She further noted that over a period of time, a combination of these two factors could lead to remission of the disease.

Diabetes Education Network (DEN), founded by Nurse Anita Cates, screened 98 participants over a six month period and confirms that Metformin with lifestyle changes produces overwhelming improvement in blood sugar levels and together are a feasible treatment for pre-diabetes and diabetes. She further sighted the need for more lifestyle coaches to assist Bahamians with the unhealthy habit of “portion distortion”.

Non Communicable Diseases such as diabetes help to drive up the cost of medical care, drugs and insurance. Further, it can cause morbidity, premature mortality or premature retirement and also loss of productivity. In 2002 economic costs due to the disease were nearly $24 million and as of 2013, that amount had increased by more than $10 million.

In the wrap up of this years’ symposium, Dr. Cates challenged the 60 plus participants. “We all have a responsibility. Each and every one of us here has a unique opportunity to leave here with the power of information so that each of us can have a positive impact on the health and wealth of our nation”, he said.

The burden of diabetes in The Bahamas is growing and education is key to its cessation. All lay people, health care providers, researchers and others have come together to bring awareness to this important topic and also get the message out on the significance of prevention.  Learning essential information regarding diabetes is paramount for reducing the statistical figures and as part of their Health and Wellness initiative, The One Eleuthera Foundation remains committed to sensitizing Eleutherans in its attempt to improve health and wellness by “Reversing the Trends”.

For more information on this and other One Eleuthera projects and events, visit www.oneeleuthera.org.