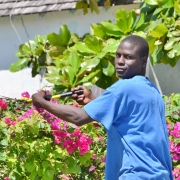 LaShawn “Mars” McPhee is a 33-year-old native and resident of Bannerman Town.

LaShawn originally wanted to join the police force. After graduating from Preston Albury High School in 2001, he worked multiple jobs back and forth between Eleuthera and Nassau until about two years ago.He was working at D&T Landscaping and Nursery employed for Baha Mar before getting laid off and coming back to Eleuthera again. It was during these two years that he learned all the tricks of the trade concerning landscaping and found his passion.

He decided to join the Centre for Training and Innovation (CTI) because at the time, he found nothing else to do on the island and he figured, why not work with friends? He already knew most of the people at CTI so that was even more motivation to give it a try. He does not consider himself to be “studying” landscaping, as he had worked in the field already. As a trainee, he is honing his skills, practicing and displaying what he has to offer while building up his reputation.

LaShawn absolutely loves what he does. He loves shaping trees and glows at the prospect of turning plants and land into works of art – he sees a rock as a potential art piece in a display where others would just see a rock. His eyes see something totally different when he looks at a landscape, he sees a canvas. Watching him work, it’s impossible to miss how his face lights up and the passion in what he’s doing.

LaShawn says that CTI has helped him in many ways beyond practicing his craft, including learning how to drive. When asked who his role models are, a long list of names rolled off his tongue. Some he highlighted in particular were: Audrey Carey, E’verne Pyfrom and Susan Culmer who are like second mothers to him, Colin Moss, who’s acted as a life coach, Ade Pinder, who “brought back English Language inside of him” and Cornetta Ferguson, who is a great math teacher that can make anyone understand the lesson. Thanks to them, he is confident he will pass the BGCSEs he plans to take in April.

LaShawn says that before CTI he was “like a coke soda bottle” – extremely impatient and ready to go off at the slightest thing. Now, he compares himself to a water bottle – no matter how much you shake it up, it never explodes. After CTI, he’s calmed down, stop drinking and has matured.

He says that the most rewarding experience at CTI for him has been helping people without expecting anything in return. Being able to help someone, touch them in way that really matters makes him feel beyond happy. What he enjoys most of all is working with people who are like family.

LaShawn says, “CTI is the place to be.” Here, people will mold you and push you. Build you up when you’re down. It’s much more than just something to do, much more than just a school. “It’s like one big family, a clique where you can depend on everyone. All of them give you words of encouragement personally, financially, in everything. They just sit down and talk to you like a parent.”