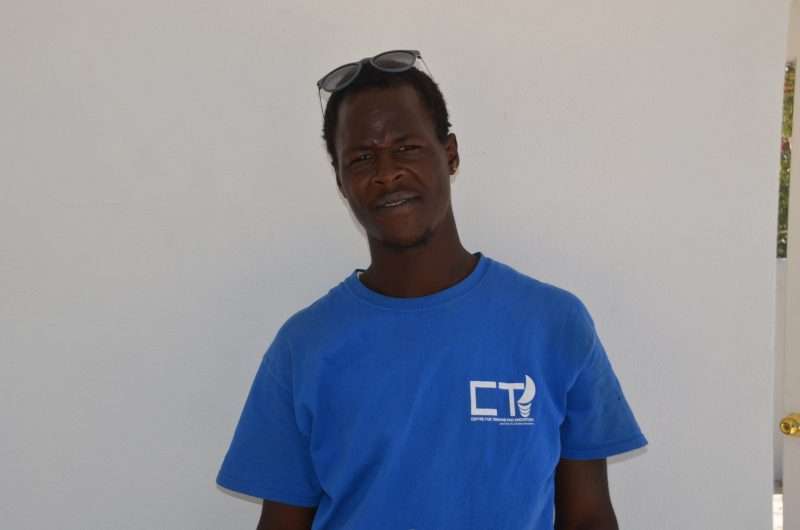 Twenty-eight year old Waterford, Eleuthera resident, Deangelo Pratt is no ordinary trainee. He hasn’t had the greatest start in life but was eager, yet humbled to tell us just how much his life changed since enrolling in the programs at the Centre for Training and Innovation (CTI) just over one year ago.

“I wasn’t doing nothing”, he said when asked what he was doing before he came to CTI. He continued, “I was out on the road drinking and fighting, smoking and chillin’ out by the bar room. I been to jail five times!” When asked why, he listed reasons like stabbing another young man, and possession of a fire arm which was his most recent offence and resulted in his having to wear an ankle bracelet.  Now, the young man is working in the area of landscaping at the Centre for Training and Innovation, helping to keep the yard beautiful and clean. He testifies of loving his job at CTI because it keeps him busy and out of trouble. He also emphatically stated that having Mr. Errol McPhee (CEO of CTI) and Mr. Collin Moss (Student Support Officer) around to speak encouraging words is quite meaningful to him and has been an important factor in his major turn-around. He told us that he likes EVERYTHING about CTI and really enjoys working there because he just loves the people and positive environment. He said, “the people cool; this is a good place to work!”

He shared that his favorite course is Computer Skills because his instructor, Paulterra Johnson, is an awesome teacher who makes the course exciting and fun.

Deangelo hopes to one day establish his very own landscaping company. He is receiving a wealth of hands-on experience working in that field at CTI, and has already been sponsored two pieces of equipment for his business. “I spoke at a Rotary meeting and Mr. Julian Carey donated me a lawn mower and a whacker!”

The Centre for Training and Innovation is proud to be a cultivator of young entrepreneurs! It certainly is no ordinary program.