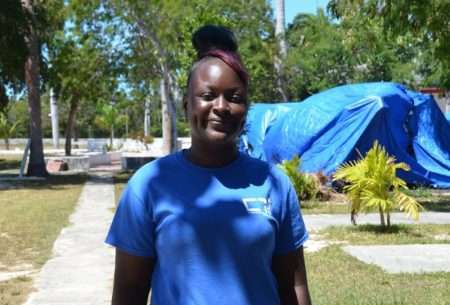 You have to hear about CTI trainee, Cercelia Thompson! The 31-year-old is a resident of Deep Creek, Eleuthera and says that coming to CTI gave her a second chance at life after being unemployed for four years!

Cercelia told us that in 2011, she took a leave of absence from her job at Half Moon Cay to go on maternity leave and give birth to twin boys. She was unsuccessful in returning to work and as a result, was unemployed for four (4) years thereafter. Close to tears, she then expressed how hard it was, both emotionally and financially, having to struggle with her sons as a single mother. “I finally got a part-time job, housekeeping at Sky Beach two days out of the week, but it did not come close to providing what I needed.”

She continued, “In January 2016 while I was at home Mr. Colin Moss, Student Support Officer at CTI, showed up and started talking to me about CTI and the programs that would be available there.” Cercelia expressed that she jumped on the opportunity to enroll in CTI and that the very next day she sent in her application.

She shared that she always had a love for baking so she almost chose the culinary arts program. “However,” she smiled, “There was something about the electrical program that drew me. My dad, cousins, and uncles always did electrical work around the house and so I decided to try that.” Cercelia said that she was anxious to try something new, especially something that is known to be a “man’s job.”

She shared her experiences in the courses so far. “We did a lot of practical work first, and that was good. But then we got into the theory and in that part I turned out to be one of the top students in the course!” Cercelia expressed that because of this, she was given the opportunity to take the Single Phase Course, which is the first step to getting her electrical license. She plans to go through all phases to get her license, and as a result, she will be able to take on private jobs to better sustain herself and her children.

“I’ve already gotten negative feedback about my decision to do electrical work, as a woman. Someone made the comment, “Hah! Who ga let Celie wire up their house?” But I am not letting that stop me,” she said with determination.

She stated that coming to CTI opened her eyes to the fact that it is never too late to follow your dreams and that she is glad that she came in with an open mind. Cercelia’s potential is endless and she shared that she is surprising even herself!