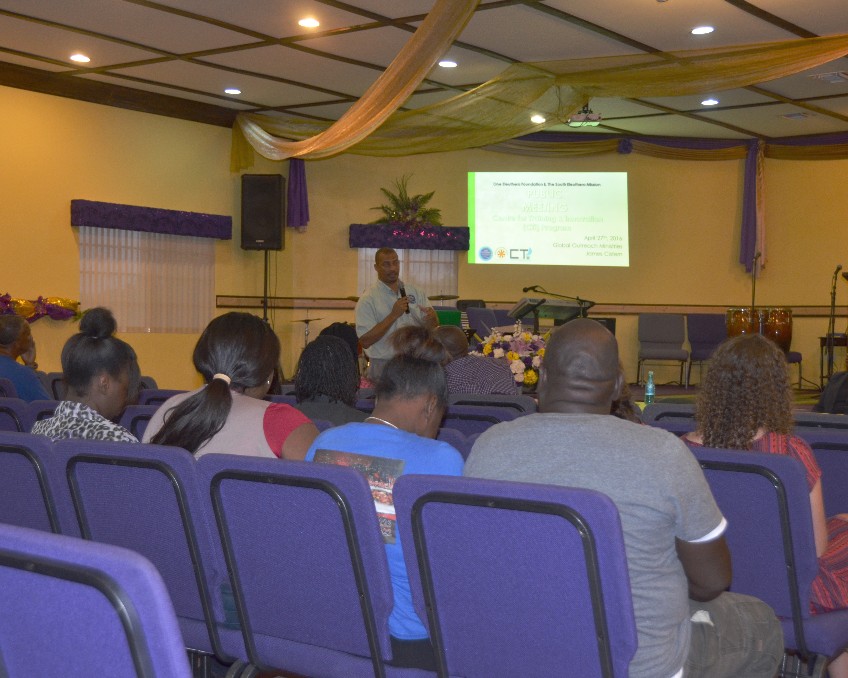 Ms. Robyn Curry, Executive Assistant, OEF, introduced the evening’s presenter, Mr. Shaun Ingraham, CEO of OEF. He introduced the concept of social enterprise to attendees, explaining that OEF was built on the social enterprise model. Mr. Ingraham spoke about the launch of OEF as an initial response to a threatened development at Lighthouse Point. He further shared that Michael Singer and Associates was engaged to gather local (Eleuthera wide) input for alternatives to the commercial development of the culturally and environmentally significant area. An eighty (80) page document, A Shared Vision for South Eleuthera, was developed, which became OEF’s blueprint. OEF was founded on five (5) pillars emerging from A Shared Vision for South Eleuthera, Environmental Sustainability, Economic Development, Educational Enhancement, Culture & Heritage and Health & Wellness and was launched on Earth Day in 2012.

Mr. Ingraham went on to expound on OEF’s partnership with The SEM. The SEM is a nonprofit organization established in 2008. In partnership, OEF and The SEM have successfully brought the Partners in Education program to South Eleuthera. The SEM provides support to local primary and high schools and also adult programming which to date has been extremely effective and includes English, Mathematics and Introduction to Computers. The SEM was thus the natural partner with which to launch the Centre for Training & Innovation (CTI). Mr. Ingraham spoke about early attempts to introduce the CTI concept, reflecting that the time and/or place were never quite right. However, he is convinced that the time for CTI is now come.

The SEM and OEF executed two programs to pilot the CTI idea. One, a collaboration with the Bahamas Technical and Vocational Institute (BTVI), provided training and train the trainer opportunities for eighty (80) people from across Eleuthera in carpentry, tiling, electrical and plumbing in June 2015. The second, a six (6) month work program for twenty-one (21) participants of the BTVI program at the former Rock Sound Club (RSC), currently the CTI main campus, in carpentry, electrical, plumbing, landscaping and farming, began in September 2015. Mr. Ingraham spoke about the February 2016 soft launch of the CTI Upgrader program for sixty (60) students including the twenty-one (21) participants of the pilot work program. The first semester ended at the end of April 2016. The vocational programming being offered includes: carpentry, electrical, plumbing, landscaping and farming. Math, English, Financial Management, Personal Development and The Law and You are weekly courses all students are required to take. The summer semester begins this coming week, and ends at the end of August 2016. Mr. Ingraham was especially excited to announce the following ten (10) CTI Student Achievements to be introduced in May 2016 which clearly reflect the difference between CTI and traditional learning institutions:

Following Mr. Ingraham’s presentation, he held an open question and answer session with the panel assisting with responses to queries. The audience participated enthusiastically. Afterward, a vote of thanks was given and the meeting was adjourned.