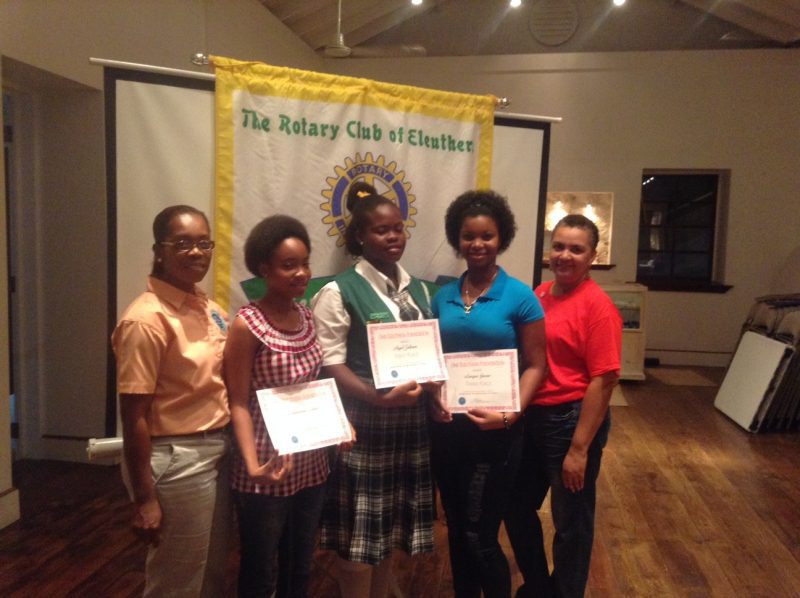 In keeping with Breast Cancer awareness month for the month of October, the One Eleuthera Foundation under its Community Outreach program  launched two competitions within the local high schools.  The students were engaged to participate in a t- shirt design competition and a Breast Cancer essay competition.

Quite a number of students submitted entries, but the selected winning design of the t-shirt competition came from Octavia Rolle, a 12th grade student of Central Eleuthera High School. Using the winning design, t-shirts were printed for distribution to the public.

There was an overwhelming show of interest with the essay competition as well. A total of 27 essays were submitted and read by a selected team. Out of the 27, the three best were chosen. These were the three students who attended the Rotary club of Eleuthera meeting on Thursday, October 31st and presented their essays in reading. They were Laniqua Greene of Preston Albury High School (P.A.H.S.), Ladeswanique Nixon, Preston Albury High (P.A.H.S.) and Angel Johnson of Central Eleuthera High. Each of these students read there essays into the hearing of Rotarians, teachers and students who were present. Third place winner was Lanigua Greene, second was Ladeswanique Nixon, of P.A.H.S and the winning essay came from  Angel Johnson of CEHS. The judges of the essay competition were Juanita Pinder, President of the Cancer Society Eleuthera Branch, Nurse Sherrin Cooper, Ministry of public Health and Glenda Johnson of the Ministry of Tourism. Certificates and a t-shirts were presented to each.

Also invited to the meeting was the t-shirt design winner, Octavia Rolle. During this time she was presented with a 1st place certificate and also a t-shirt.

Overall, there was a great outpouring of support from the local high schools, teachers and students. It should also be noted that the rotary club of Eleuthera continues to be a tremendous source of support.